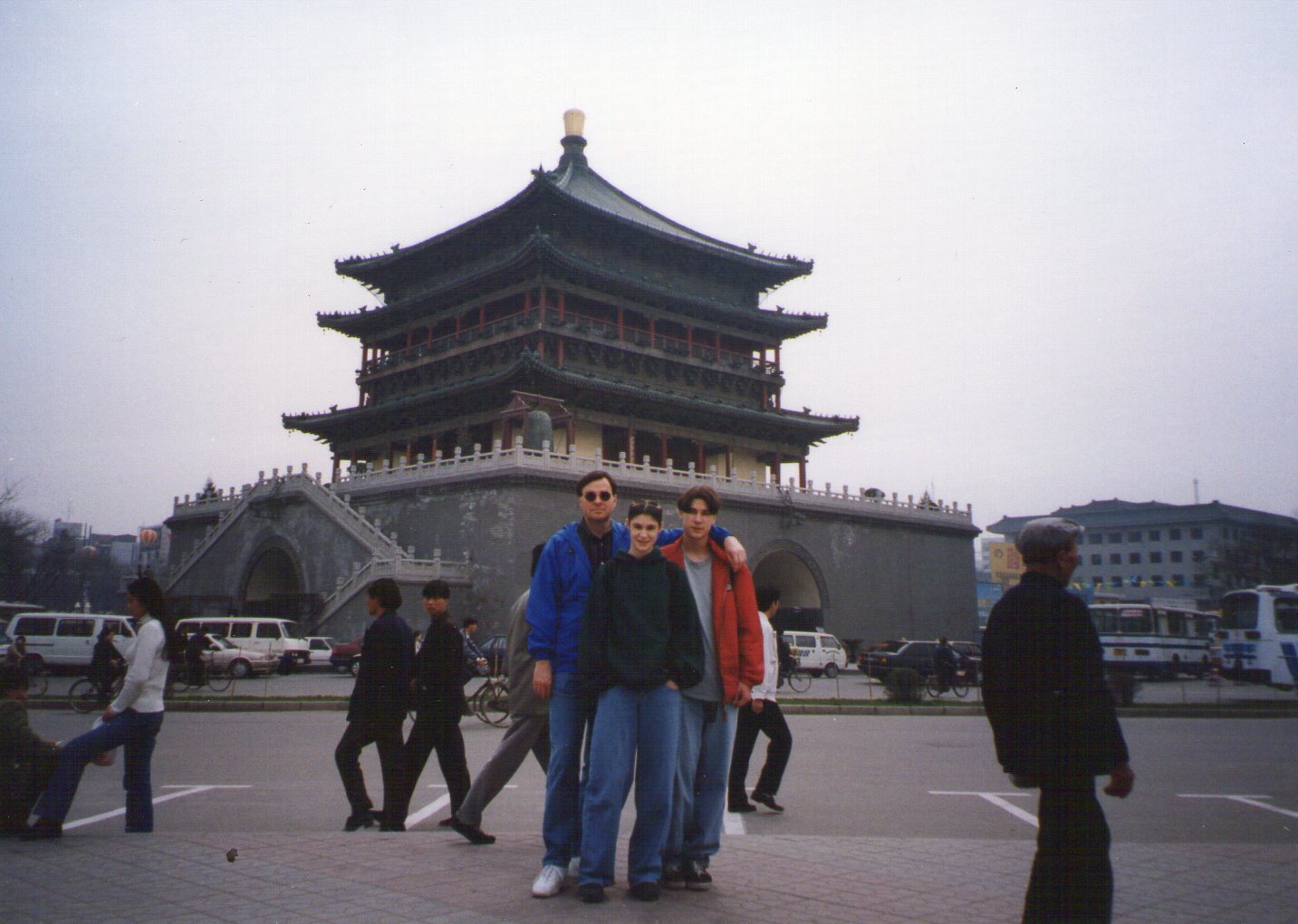 It’s a natural process to learn more about yourself as you go through life. In general, as we grow up, we are not typically on a conscious quest to “find yourself”: discovering what drives you, motivates you, gives you a will to live. A sense of purpose comes later in life…for some (others may never know their purpose, even if they are living it). But, as I try to tell my own kids, it’s each decision that you make – from the smallest split-second decision to the well-thought-out plan – that determines who you are.

I didn’t have your “typical” childhood (if there is such a thing). It started out with in the suburbs of a Midwestern town, surrounded by the love of a middle-class family: a happily-married set of parents, a younger brother who I shared typical siblings squabbles with, and extended family who got together on the holidays. My mom has told me stories of hearing an ad on the radio for Singapore Airlines during this time in our life and remembers how she longingly wished for an opportunity to travel to such exotic locations as where this airline could take her. Little did she know that our move to Texas, around the time I was nine, would be the beginning of her getting her wish.

Our move to Texas was unthinkable for our extended family. They each seemed content to live out their lives in roughly the same neighborhood they grew up in…looking back, I can see the benefit to this: being surrounded by friends who have known you since grade school and observe how time changes an area as progress or poverty wash over it. But my parents wanted more and decided to jump at the opportunity to move when my dad’s job presented it to him. I remember being excited about the move, particularly the prospect of riding a horse to school (because everyone MUST have a horse in Texas). This idea, however, was destroyed the moment we moved into our next home, in a suburban neighborhood, to my surprise, similar to the one we just left (but in a MUCH hotter climate). My attitude was not dampened, however, as I made a good friend quickly and fit in at school. We all fell into a routine and life was good. Then, a few years later, my dad got an opportunity at work to move us…of all places…to Singapore! The conversations my parents must have had to make their decision I can only imagine, but their adventurous nature decided to make use of the opportunity. This move proved a bit harder on me since I had to leave my good friend, but what say did I have? I was a kid; I went where my parents took me.

On to “Transition Asia”…

Singapore is known as “Transition Asia.” They call it this because although it’s in Asia, the national language is English and it is very clean and modern, compared to other countries we would soon travel. As was custom for American “ex-pats” as we were now known, my brother and I went to the American School, a private school where uniforms were worn and kids from around the world attended.

We also had a membership to the American Club so families could socialize in a more familiar environment customary to those of European-decent. Life needn’t be much different from back in “the States” save a few new holidays, food choices, and vacation options. In Singapore, the world was opened to us. For Christmas, we traveled to places like Chiang Mai, Thailand and for a school trip we went just across the boarder to Malacca, Malaysia. Again, life took on a new dimension of familiarity with established close friends …and then my dad had another opportunity with work to move again. This time, it was to Shanghai, China. What a great opportunity for my dad! He would be opening up a new branch for the company; they were entrusting him with the responsibility – a Midwesterner with humble beginnings. My parents decided, together, to jump at the opportunity…with all the uncertainty that lay ahead.

Then “Paris of the East”…

Shanghai was quite different from Singapore, to say the least. This was apparent from the moment we flew over Hongqiao International Airport – the smog overtook the runway in all its glory, as we were landing. My mom recalls my brother and I looking at each other with worried expressions and then over at her as if to say, “We hope you know what you’re doing.”

In the early 1900s, Shanghai was known as “The Paris of the East” or “The New York of the West”. As a key trading post, architecturally, even when we were there in the late 1990s, it was a unique blend of European design in a backdrop of ancient Chinese rooftops. But, in a city of roughly 15 million people, emission standards were far behind that of the U.S. making air pollution visible as smoke fumes billowed out of the taxis and overcrowded buses. Foreigners were also a rarity when we lived there. Coming from tropical Singapore, where it’s 90 degrees year-round, to Shanghai in the middle of winter, our first stop was to find warm jackets. I recall shopping at a modern department store with a crowd of locals literally hovering over our shoulders to see what styles piqued our interest. My mom quickly picked up Mandarin lessons to make the transition easier. By this time, my dad was away on business trips regularly and taxis made transportation possible for my brother and me so she was left alone often to discover new hobbies. We still had our amazing family vacations on the holidays to places like Hong Kong and Beijing and sports took me to competitions in places like Seoul, Korea and Manila, Philippines. My brother and I were getting older, experiencing the typical growing pains as any teenager, but with a lot more freedom in a culturally diverse, semi-unstructured environment.

It was the beginning of my tendencies to seek out and create the unexpected. Visually, it was through the way I dressed: baggy pants, long chain, and tight tank tops (The JNCO jeans craze was going on in the U.S., but not among the expat kids in China). During a school trip back to the U.S. (through a program called Close Up to learn about the U.S. government), in a whim decision, I decided to cut my hair short and dye it orange; I remember looking in the mirror when the stylist was done and not even recognizing myself. It was a somewhat unnerving, yet exhilarating feeling. When I got back home, I think my parents were apprehensive with the change, but allowed me to express myself. Although outwardly I drew attention, I was still very much an introvert. I hung out with large groups of people, yet only a couple of them were ones I would confide in. Then, I got my first boyfriend; he was older, out of school already, but hung out with our group. My personality had developed in to an all-in or all-out approach, so we fell in love and were inseparable. Our next family move felt heart wrenching; from a parent’s perspective: teenage drama!

With the Shanghai branch of my dad’s job now securely established and my brother and I now well into our teenage years, my parents decided it was time to head back home to the States. We went back to Texas after spending five years abroad. I was headed into my junior year at a respected public high school in a predominantly white area of Austin. I entered school with optimism, based on my previous years of experience being accepted as a new kid. Unfortunately, I was not well-received this time. Here, the kids had all grown up together and my outlandish looks, despite the contagious smile I wore, were off-putting to most. My smile faded, my clothes tended to be black as well as my lipstick. I fit in where I could then worked hard to graduate early. After graduating mid-way through my senior year, my mom took the two of us on a trip back to Shanghai so I could catch up with my friends. I discovered they had moved on; it all felt unfamiliar. I started to question where I belonged.

Back home in Texas I took on a full-time job at a local spa as the receptionist. The role fit well with my desire to look different, having the ability for stylists to color my hair different colors on a regular basis, but my attire was maturing as was I.

When it was time to start my freshman year of college, I didn’t question going – I grew up knowing it was expected, although I didn’t know what I wanted to do. I guessed photography, with hopes towards one day photographing for National Geographic, but the college I chose didn’t offer that major so instead I found myself in mass communications. Then 9/11 happened.

I had just signed up to write for the college newspaper. My first published article was the day after the tragic event. It was an opinion column titled: “Tragedy Strikes But Everyday Life Goes On”. It was a testament to my mindset at that time in my life and one that has carried me through all the wrong decisions I was yet to make throughout my young adult life. As Disney later put it more eloquently in one of my kids’ favorite movies: “Keep moving forward.”

As parents, we aim to set our kids up for success. We provide an environment with a stable mix of love and support plus limitations, allowing each person to grow, taking away what they will from what you provide. This becomes harder as they get older and pull away from you – so much of what they feel, experience, and decide takes place away from a parent’s watchful eye. But we can never give up on them, continuing to stay interested in what occupies their thoughts and their time. Beyond that, pray that a higher power will guide them so that they may one day fulfill their purpose.